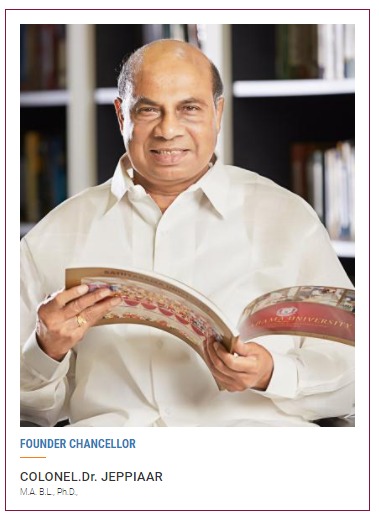 Col. Dr. Jeppiaar, the Founder Chancellor of Sathyabama Institute of Science and Technology is a self-made man. Having served the society in various capacities as an Administrator in Government and Politics in early days, he dedicated the latter part of his life to the cause of education. He has established Sathyabama Engineering College in the year 1988, with the aim of providing opportunity to deserving students to pursue engineering education, during a period in which engineering education was a far-fetched dream for many.

Dr. Jeppiaar is an educationalist par excellence who founded many popular Educational Institutions. He was considered to be a great visionary leader by everyone in the field of engineering education and people depended on him for his guidance. He was known for his strategic initiatives and bold decisions, which was meticulously followed by many of his contemporaries. His ideas and views were highly innovative and novel, which made him an inevitable force in the field for more than three decades. What made him a distinctive leader was his humanitarian approach filled with empathy. Dr. Jeppiaar pursued  his law degree and was a practicing advocate in the High Court of Madras. His thirst for education didn’t stop even at the age of 70 as he  pursued his Doctoral degree from Anna University in the area of Water Resources Management which was highly commended.

Col. Dr. Jeppiaar believed that it is the responsibility of the Educational Institution and Teachers to groom students’ and develop them as qualified, eligible and employable graduates, irrespective of their capabilities when they join the Institution. His famous quote, “ENTRY IS NOT IMPORTANT, EXIT IS IMPORTANT”, insisted this principle.  He also wished that Educational Institutions should nurture values with wisdom.

He is simple man by nature, but endowed with the mind of a great visionary. Apart from academic endeavours, He has also explored into many fields of business and proved his business acumen and leadership. Behind every initiative of his, was a noble cause. Through his ventures, he had created employment opportunities for multitude of people in the community. He has constructed a private harbor at Muttom, his birth place, a Coastal area of Kanyakumari District to provide employment opportunity to the people of that village, situated in the extreme Southern part of India.

Besides being an accomplished educationist he was also a great writer and was actively involved in the fields of literature and fine arts. During his early career, He has also served as Editor for a popular Tamil Weekly and Daily.

Col.Dr. Jeppiaar has been conferred with various awards and accolades as a token of respect for his contribution to the field of education and to the society at large. He was commissioned as honorary Colonel by the Ministry of Defense in recognition of  his services to the society.

Col. Dr.Jeppiaar was indeed an exemplary leader, a commendable administrator, with uncompromising commitment to excellence. He is an epitome of humility and dignity, with matchless love and compassion for fellow beings. His incredible deeds and noteworthy accomplishments will speak volumes about him.

Col. Dr. Jeppiaar is truly a great inspiration to everyone who wishes to achieve success in personal life and professional life.

Protected by Copyscape Web Plagiarism Finder and maintained by Projectteam.